A collection of articles, opinion pieces, books, news sources and other Information on the current conflict in Ukraine. .

Learn more about the Russia-Ukraine Conflict and the history of this region.

A timeline of the tensions between Russia and Ukraine. 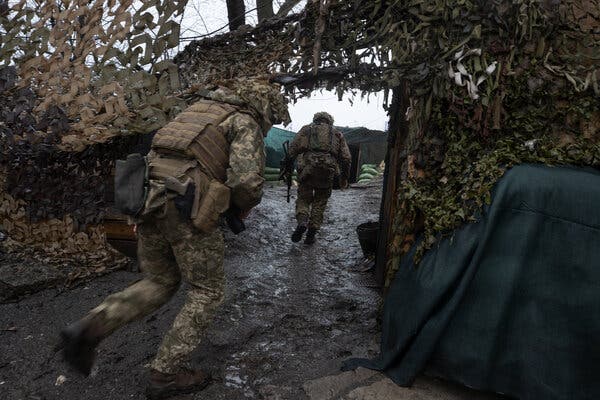 Two founding members of the Soviet Union — Russia and Ukraine — are once again at a flash point. Here are some pivotal moments leading to a Russian invasion that some fear could become the largest military action in Europe since World War II.

February 2014 — Protesters in Ukraine overthrow President Viktor Yanukovych, who was friendly to Russia’s interests. During the revolution, more than 100 people are killed in protests that centered on the main square in the capital Kyiv, often called the Maidan.

The interim government that followed this pro-Western revolution eventually signs a trade agreement with the European Union that is seen as a first step toward membership of the bloc.

The war continues in the eastern Ukrainian region known as Donbas. It then spreads west. Roughly 13,000 Ukrainian soldiers and civilians eventually die in the conflict. The front lines have barely shifted for years.

2014 and 2015 — Russia, Ukraine, France and Germany sign a series of cease-fire agreements known as the Minsk Accords. Many view these accords as ambiguous.

April 2019 — A former comedian, Volodymyr Zelensky, is elected by a large majority as president of Ukraine on a promise to restore Donbas to the country.

2021-2022 — President Vladimir V. Putin of Russia seeks to prevent Ukraine’s drift toward the United States and its allies. Mr. Putin demands “security guarantees,” including an assurance by NATO that Ukraine will never join the group and that the alliance pulls back troops stationed in countries that joined after 1997.

Many Russians view the Ukrainian capital, Kyiv, as the birthplace of their nation and cite the numerous cultural ties between the two countries.

Here is a brief recap of their relations in the 20th century:

1922 — Russia and Ukraine became two of the founding members of the Soviet Union.

1932 and 1933 — A famine caused by Stalin’s policy of collectivization kills millions of people, mainly ethnic Ukrainians in a country that is known as the bread basket of the Soviet Union. The disaster is known as the Holodomor.

1941-1944 — Nazi Germany and the Axis powers occupy the country during World War II.

1991 — The Soviet Union is terminated via a treaty. Ukraine becomes independent and begins a transition to a market economy. It also comes into possession of a significant stockpile of nuclear weapons that had belonged to the Soviet Union.

1994 — Under the Budapest Memorandum, Ukraine gives up its nuclear arsenal in exchange for a commitment from Moscow “to respect the independence and sovereignty and the existing borders of Ukraine.”

Far from Russia's war in Ukraine, stores are running out of cooking oil, people are paying more at the gas pump, farmers are scrambling to buy fertilizer and nations are rethinking alliances.

Russia's invasion of Ukraine has triggered seismic repercussions: a fast-moving refugee crisis, unprecedented sanctions against a major economy and a shakeup of global relationships, including a reinvigorated NATO. Below, we zoom in on some of the ways the world has changed since the war began on Feb. 24.

Ukraine and Russia are key exporters of wheat, barley, corn and cooking oil, particularly for African and Middle Eastern countries. Russia is also a major producer of fertilizer and petroleum. Disruptions to the flow of these goods are compounding other supply chain and climate challenges, driving up food and gas prices, causing shortages and pushing millions of people into hunger.

More than 5.8 million people have fled Ukraine in one of the fastest-growing refugee crises in recent history. Humanitarian groups, with resources already strained by crises elsewhere, have sprung into action. The U.N. refugee agency has projected that some 8.3 million people might leave Ukraine and called for more financial support for refugees and host countries as both face challenges with access to food, housing, transportation, education and money.

A 21st century war in Europe — led by a nuclear power — is pushing the world toward a potentially profound realignment. It has rattled prominent global players such as the European Union and the United Nations and forced countries to take sides in new ways that have led to escalating tensions and momentous diplomatic shifts.

Russia is the second-largest producer of natural gas and the third-largest producer of oil. The European Union has particularly depended on Russian energy; it is now preparing to phase in an oil embargo. A historic restructuring is sweeping the global petroleum and gas trade as countries ban or cut Russian energy imports, sanction Russian companies, face Russia's demands for payments in rubles and search for alternative sources.

Russia has more nuclear weapons than any other country in the world. Its military attack on Ukraine has notably reenergized NATO, a military and political alliance of the United States and European countries. Urgently, countries around the world have escalated military spending or have begun a consequential reevaluation of their defenses.